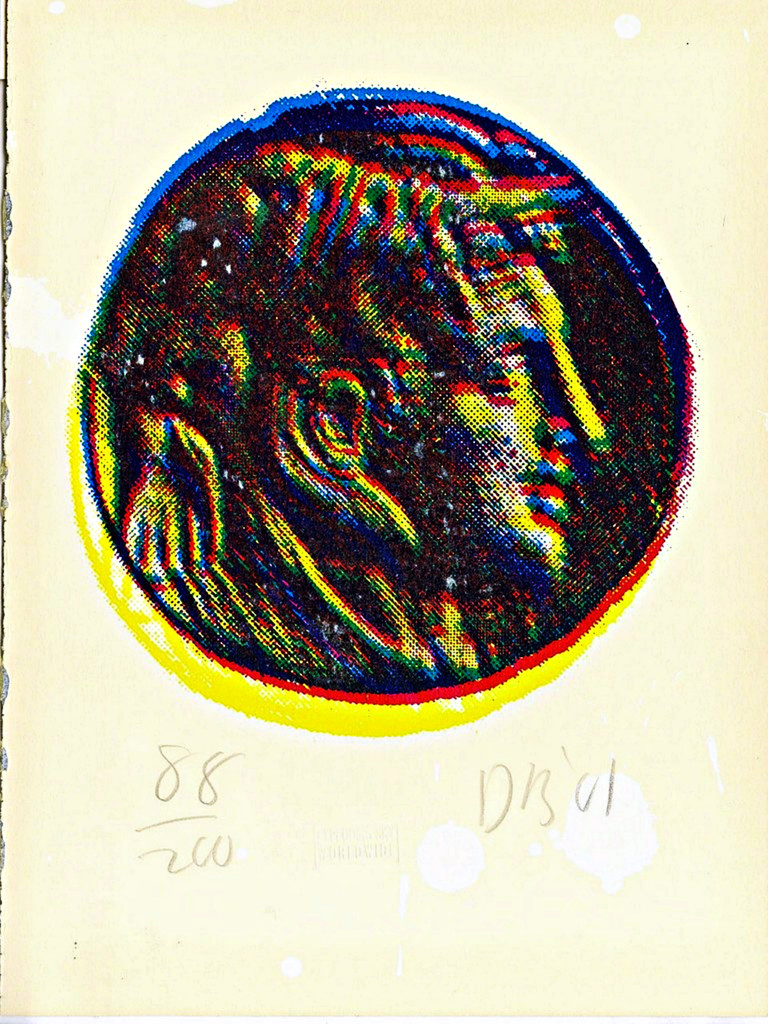 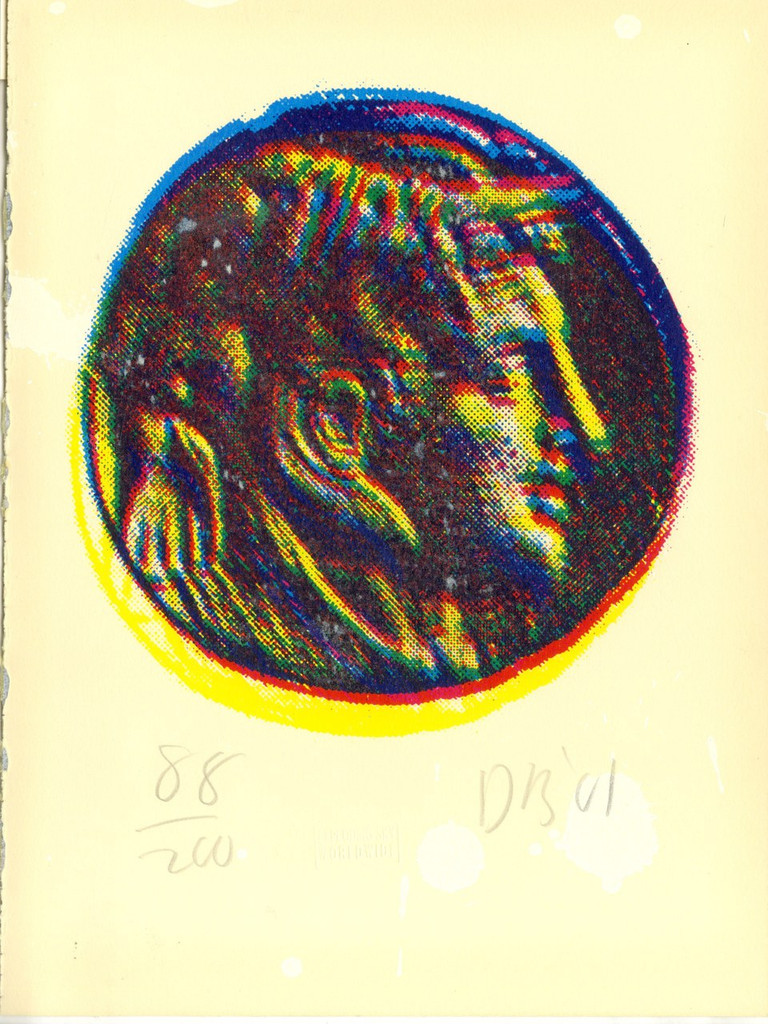 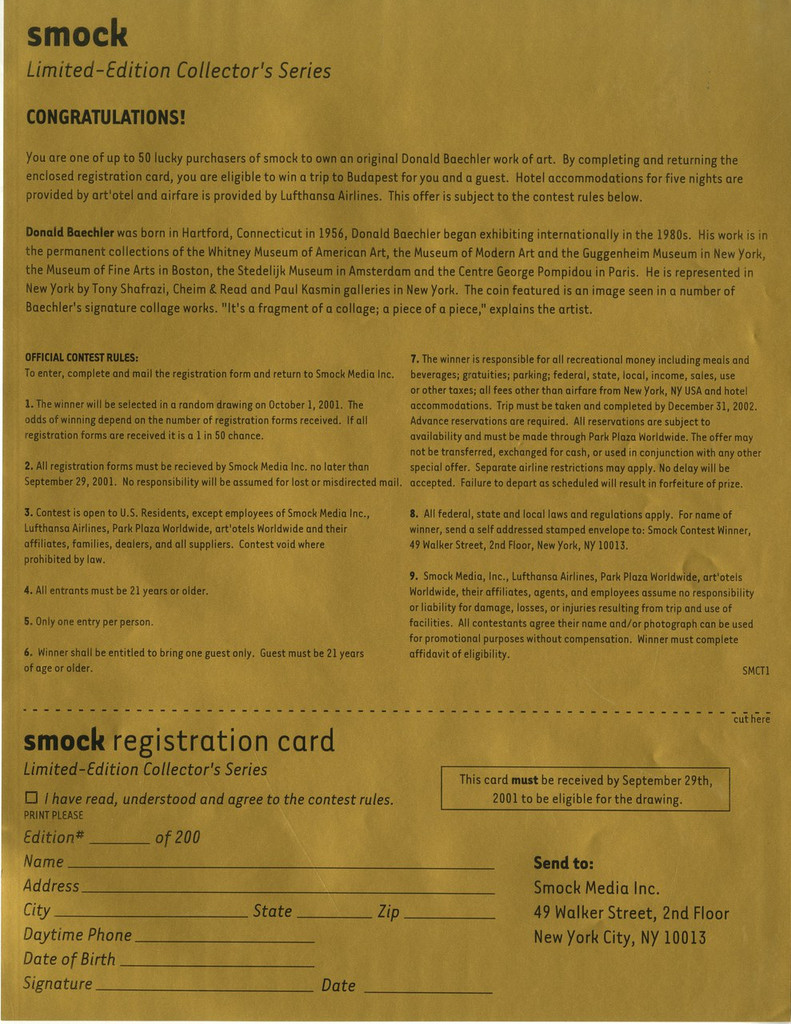 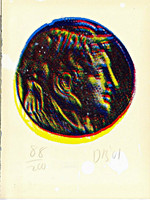 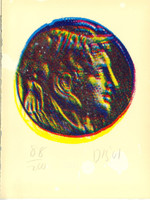 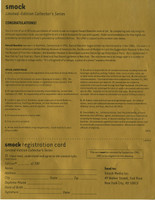 Here is a terrific hand signed,  numbered and dated color silkscreen of an ancient coin by American art star Donald Baechler.This work is in excellent condition. The image has a 3-D effect, and the discoloration/gradations of color on the sheet are deliberate effects. Although the work is apparently untitled, it certainly appears to be a homage to Warhol's "Alexander the Great", and the text that accompanied the work's unique provenance, describes Baechler's fascination with ancient coins.

It was published in 2001 by Exploding Sky Worldwide. (“Exploding Sky” is the name of the studio founded in the early 90s by twin brother artists Matt and the late Mark Enger on New Yorks lower east side. The Enger brothers began making silk screen paintings and street wear that reflected their knowledge and passion Pop Art. Matt and Mark collaborated through silk-screen printing with many artists and designers including Kiki Smith, Donald Baechler, Catherine Malandrino, Robert Rauschenberg, Spooky, and others.

The print measures 12 inches (vertical) by 9 inches (horizontal) and is pencil numbered from the edition of 200. It bears the "Exploding Sky" distinctive blind stamp on the recto (front).

What makes this work special is that it was a prize given to only 50 lucky winners of a "Smock Magazine" lottery back in 2001. Included with this print as provenance is the original Smock Magazine Flyer, congratulating the lucky winner of this Limited Edition Collector's Series print, and inviting them to enter a contest for a free trip to Budapest. The sheet features a biography of Baechler, and a description of this particular work:

"The coin featured is an image seen in a number of Baechler's signature collage works: 'it's a fragment of a collage; a piece of a piece,' explains the artist.

Provenance: Superb provenance: This is one of only 50 prints that were given to lucky winners of a Smock Magazine contest, back in 2001. 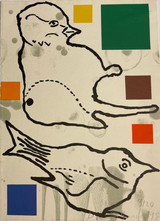 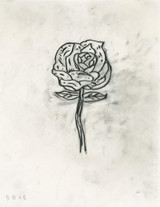 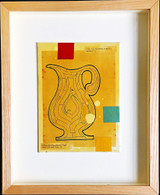 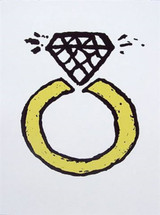 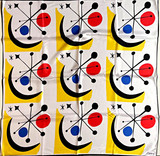