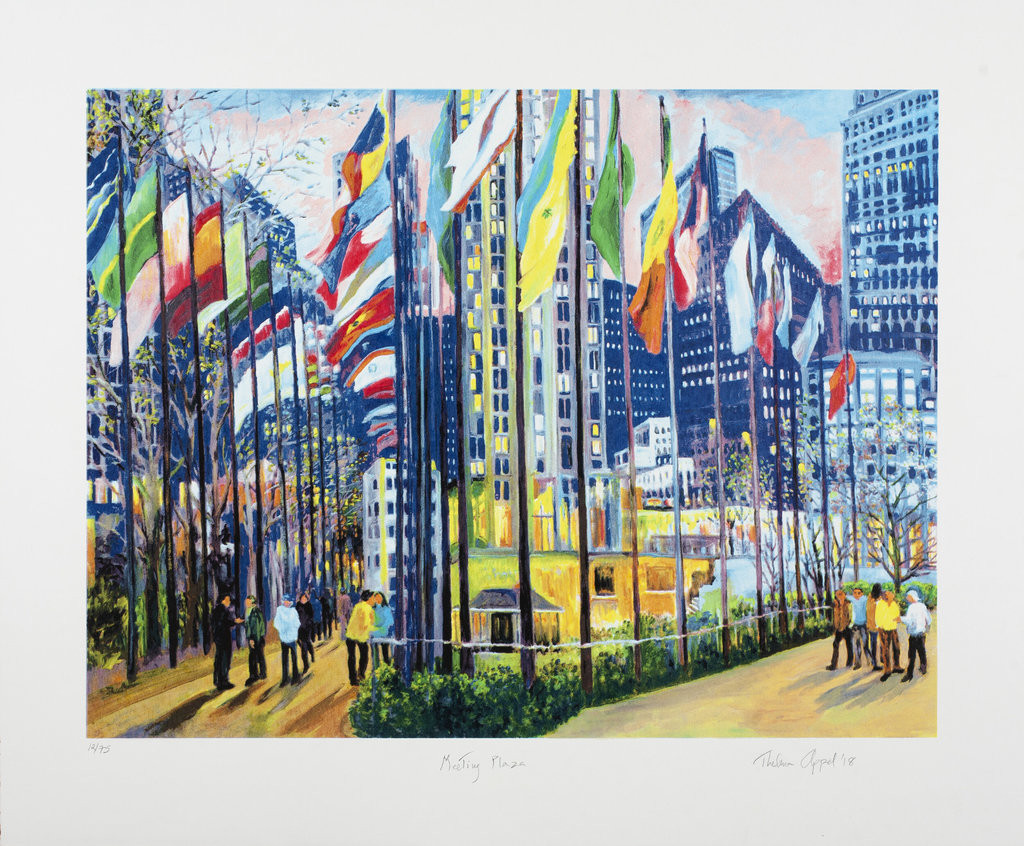 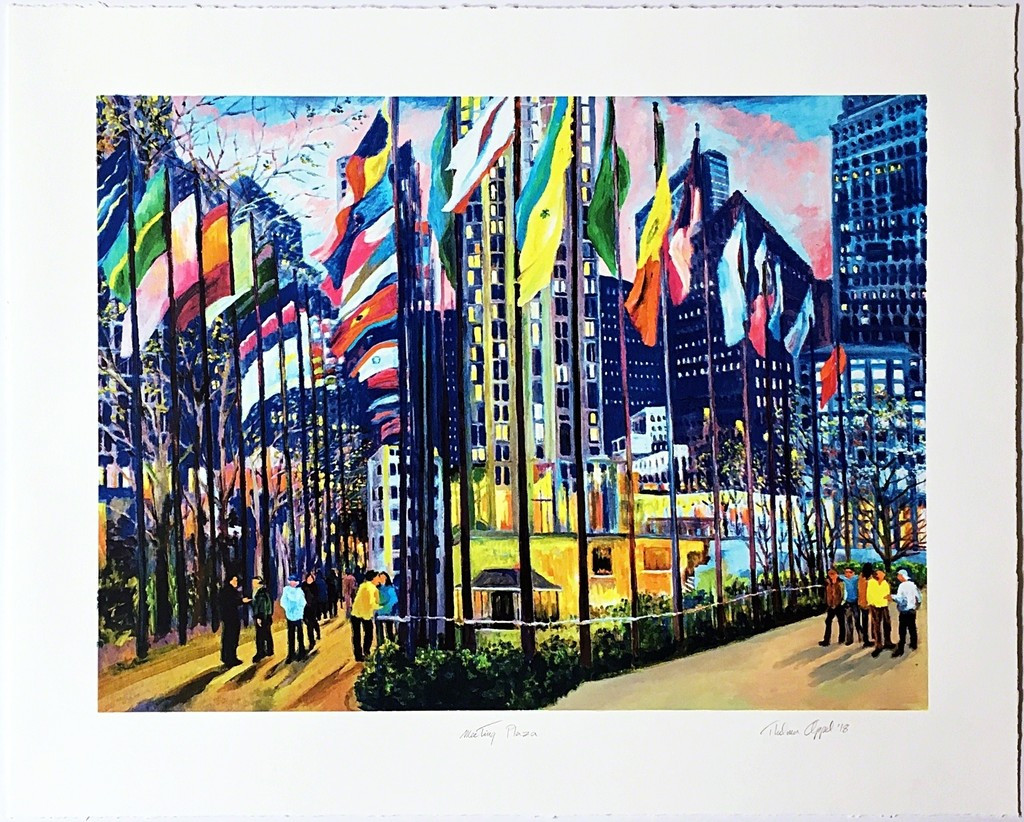 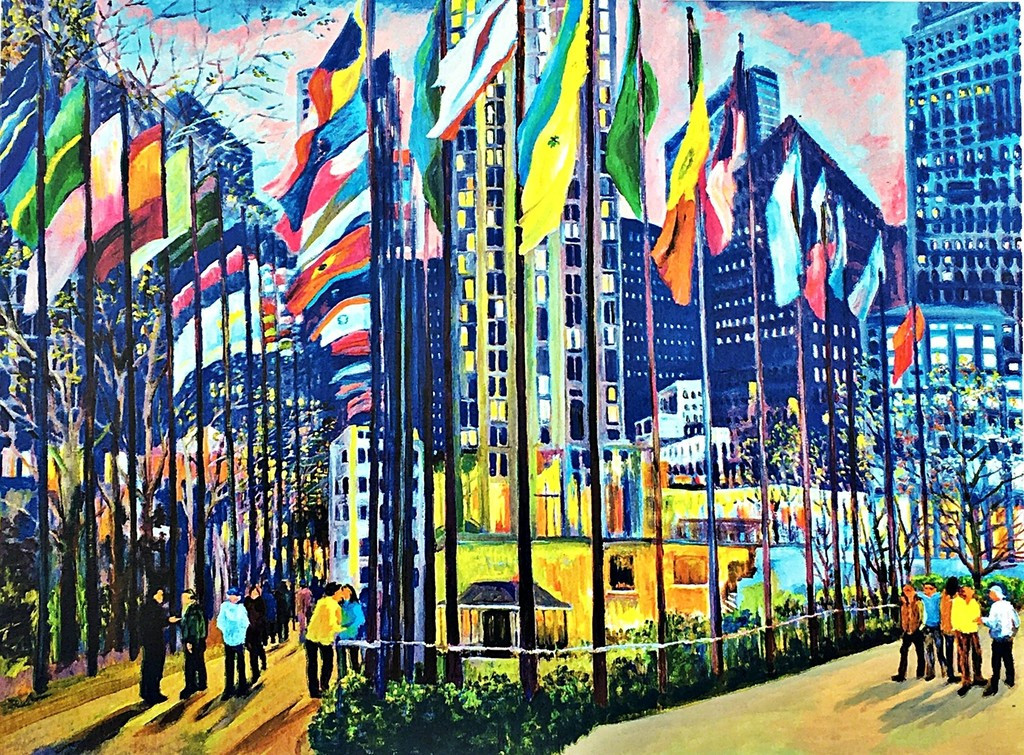 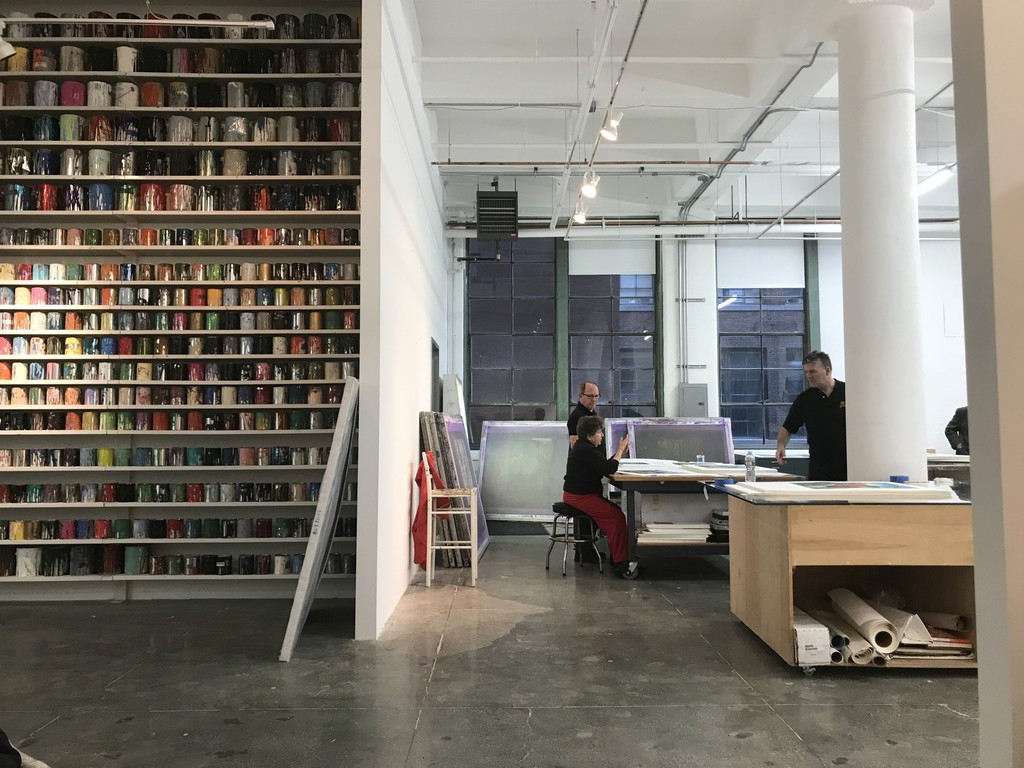 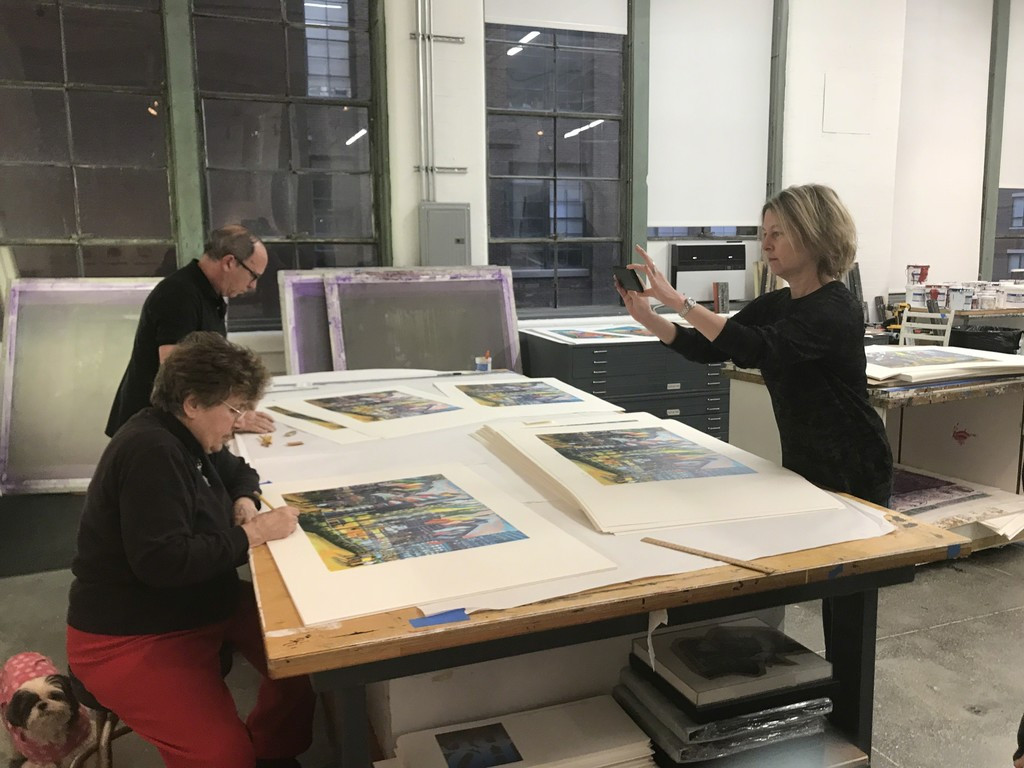 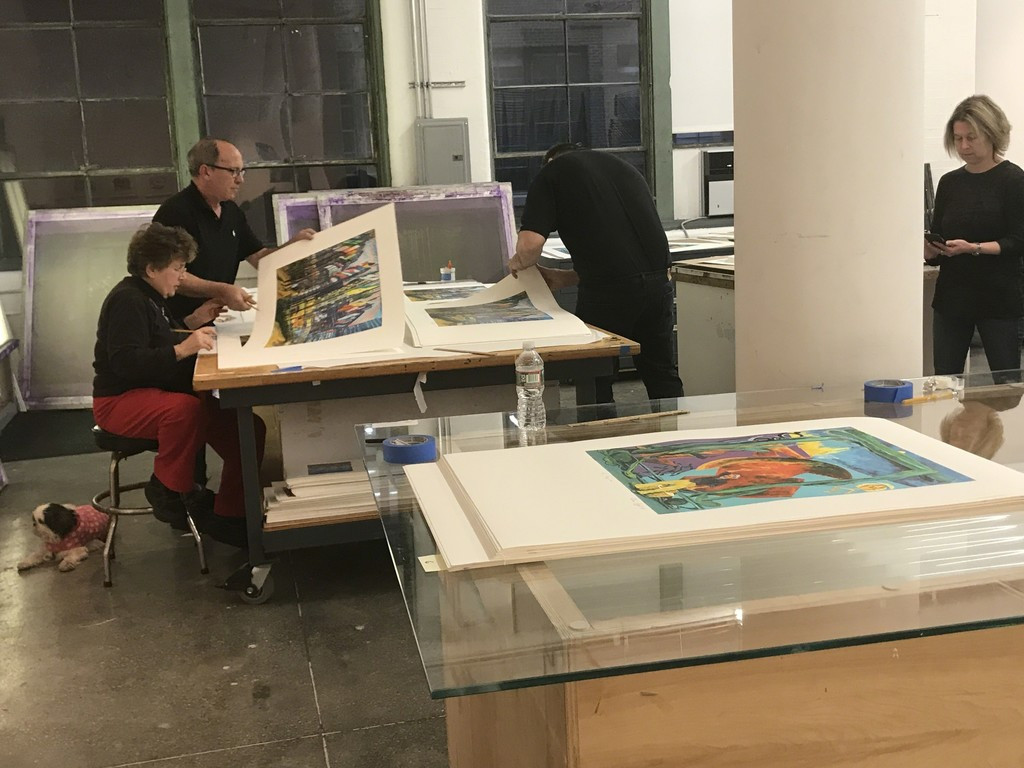 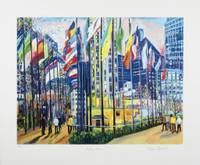 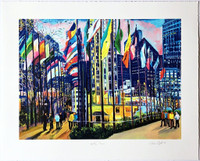 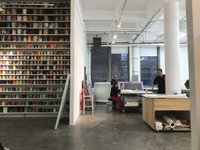 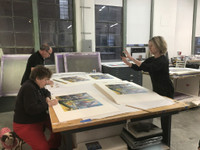 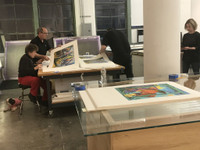 This is an original silkscreen done in collaboration with master printer Gary Lichtenstein of Gary Lichtenstein Editions. Another example of this work was featured in the invitational exhibition "Women on Paper" in April, 2021 at the Sager Reeves Gallery in Columbia, Missouri.

Dazzling 25-color silkscreen, "Meeting Plaza", by abstract and representational artist Thelma Appel. In 2019-2020, Ms. Appel the subject of a 50 year career survey at the Brattleboro Museum in Vermont. Link below:

https://www.brattleboromuseum.org/2019/06/04/thelma-appel-observed-abstract/
And below a recent article on the show:
http://www.commonsnews.org/site/sitenext/story.php?articleno=31441

Meeting Plaza is evocative of New York's Rockefeller Center and the United Nations - and would look beautiful in any home, office, restaurant - or meeting place. The flags are abstracted, to emphasize international unity, rather than single out any individual country. This silkscreen was printed by Gary Lichtenstein Editions at Mana Contemporary Art Center: "Gary Lichtenstein is a superb professional and a meticulous craftsman; an artist could not ask for a better collaborator," says Appel. "I've admired the work he did with so many artists ranging from Robert Indiana to Carole Feuerman and Marina Abramovic. It was a real pleasure having the opportunity to work with him as well." "Meeting Plaza" is based on Appel's eponymous oil painting, first exhibited by the Chashama Foundation on Sixth Avenue in Manhattan - near Rockefeller Center. The artist explained: "When I first conceived the idea for this painting, I had in mind a city setting; perhaps people ice skating in Rockefeller Center in NYC - a famous tourist attraction, and so iconic to my memory of once living in this vibrant city. As I perused through various references and began to block out preliminary shapes of buildings, trees and people, I realized that what I was actually wanting to convey was a city that welcomed all nationalities and all people. I added flags hoisted on poles, which I believe corresponded rhythmically to the late autumn trees, almost barren of leaves. The flags for me are a counterpoint to the city’s geometric architecture, and their suggested movement and irregular shapes echo the organic morphology of the people below. I painted an evening sky. It is dusk. Nobody is rushing. People are conversing with each other, walking slowly or gathering in small groups enjoying a calm evening in the city, in a place that is reminiscent of The United Nations, and Rockefeller Center —an obvious public setting, yet more intimate. This is how I want to remember my time in the city. I too, am one of the people converging at the 'Meeting Plaza' ..." The present work is unframed but is shown framed when it debuted at the Art on Paper fair for reference/inspiration.

Thelma Appel is a representational and abstract painter who has been working and teaching for more than six decades. In 2019, she was the subject of a 50 year career survey at the Brattleboro Museum in Vermont entitled Thelma Appel: Observed/Abstract. She was raised in Darjeeling, India and educated in London, England, at St. Martin's School of Art (now Central St. Martins) and Hornsey College of Art before emigrating to the United States in the 1960s. Now in her 80s, her work is being re-discovered by a new generation of collectors and curators. In 2020, art historian David Cohen publisher and editor of Artcritical.com selected Ms. Appel's painting for the exhibition "Pets of the Pandemic", awarding her a special commendation with the comment, "masterful double portrait". Most recently, she was awarded "Most Expressive" for her work in the invitational exhibition "The Art of Experience". Another painting of Appel's, "Exodus by Moonlight" about refugees was included in an exhibition at the Brattleboro Museum in Vermont. Her work has been exhibited in numerous venues, including the Bennington Museum, the Berkshire Museum in North Adams, Mass., the Children's Museum of the Arts in New York City, the Mattatuck Museum, the Brattleboro Museum, the Milwaukee Art Museum, the Robert Hull Fleming Museum at the University of Vermont, the University of Pennsylvania Fine Arts Gallery - and seen on the A & E Television Series "The Way Home." In the 1980s, she was represented by the renowned Jill Kornblee Gallery on West 57th Street, and later Fischbach Gallery - (at the time the gallery of record for Alex Katz, Lois Dodd and other representational artists), and Appel's works were acquired by many private and public collections. She is also a longtime art teacher, having taught drawing at Parsons School of Design, painting at Southern Vermont College and at the University of Connecticut. In 1974 she was awarded a YADDO Fellowship, and in 1975, Thelma Appel, along with the painter Carol Haerer, co-founded the Bennington College Summer Painting Workshop, where many distinguished painters of the day, both abstract and representational, conducted master classes. Among them were Neil Welliver, John Button, Alice Neel, Larry Poons, Friedel Dzubas, Stanley Boxer, Elizabeth Murray and Doug Ohlson – a program that continued until 1980. In 2014 Appel was awarded a solo show by the Chashama Foundation: Thelma Appel: Landscapes and Cityscapes. In 2019, the curators of the Art New York fair at Pier 94 chose works from her Times Square series of paintings for their public project exhibition space sponsored by Absolut vodka, and in the Fall of 2019 the curator of the Port Authority of New York and New Jersey in collaboration with Chashama Foundation selected Appel's. Times Square series to be exhibited in a solo show at their Project Find space – a public exhibition at the Port Authority Bus Terminal. From October 2019 to February 2020, the Brattleboro Museum in Vermont is hosting a career survey of Appel’s work entitled Thelma Appel: Abstract/Observed curated by Mara Williams. Appel became known primarily for her paint-soaked brush strokes on large canvases that sought to recreate the energy, color and immediacy of the landscapes. In a recent documentary interview, the artist explained why she considers herself a Romantic landscape painter: "Not recording mimetically what lay before me, but trying to express the excitement I felt in response to nature by using paint-soaked brush strokes on a large canvas wherein the overlapping layered strokes of color were metaphors for the contiguities found in nature. My early paintings sought to recreate the energy, color and immediacy of the landscapes...to convey a more raw "painterly" feeling within the image, rather than recording a particular scene or looking on from a distance. "

Hand signed, titled & dated by the artist on the lower right recto (front). Numbered from the limited edition of only 75. Artist and gallery signed COA.

For inspiration, a photo of the work framed is shown. 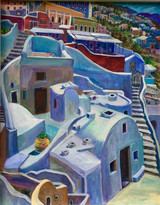 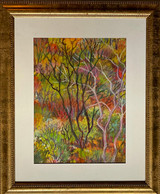