USD
CLICK HERE - THEN SCROLL DOWN TO SUBMIT REQUEST FOR A 10% DISCOUNT CODE ON YOUR NEXT FINE ART PURCHASE. REPEAT CLIENTS ARE WELCOME!
Home / Prints and Multiples / Romare Bearden, Mother and Child (from Conspiracy: The Artist as Witness) 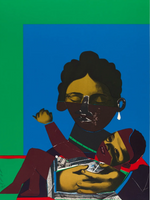 Mother and Child, from Conspiracy: The Artist as Witness, 1971

Rare Artists Proof, aside from the regular edition of 150

Mother and Child by Romare Bearden is a seven-color signed, limited edition silkscreen and offset lithograph, proofed by hand and pulled by machine from one stone and six zinc plates on Arches paper. Described by scholars as "unique in their complexity," the theme of mother and child was of considerable importance to Bearden, recurring throughout his career and becoming his most coveted subject matter for collectors. An edition of this print was featured in the major 1995 traveling museum retrospective titled, A Graphic Odyssey: Romare Bearden as Printmaker, hosted by the Brooklyn Museum. The curators wrote: "Mother and Child...possesses a dimension of Christian spirituality deriving from the iconic subject. Bearden’s artistic heritage may have been Western, but his historical and personal perspectives were defined by the African-American experience."
Romare Bearden (1911-1988) was an African-American artist born in North Carolina, before relocating as a young child to New York City. In New York, his home became a meeting place for major figures of the Harlem Renaissance such as Charles Alston, W.E.B. Dubois, Duke Ellington, and Langston Hughes. He graduated from New York University in 1935, and studied with George Grosz at the Art Students League in 1936 and 1937. After helping to found an artists’ group in support of civil rights, Bearden's work became more representational and more overtly socially conscious, reflecting the spirit and conscience of African-Americans during this crucial era in American history. It was during that era - considered the most desirable in terms of Bearden's oeuvre, that he created this iconic print Mother and Child, for The Center for Constitutional Rights.
The present work was created for the legendary portfolio Conspiracy: the Artist as Witness, to raise money for the legal defense of the Chicago 7, a group of anti-Vietnam War activists indicted by President Nixon's Attorney General John Mitchell for conspiring to riot during the 1968 Democratic National Convention. Conspiracy The Artist as Witness featured works by Jack Beal, Romare Bearden Leon Golub-Nancy Spero, Sol Lewitt, Robert Morris, Claes Oldenburg, Larry Poons, Bridget Riley, Peter Saul, Raphael Soyer and Frank Stella.

Nancy Spero and Leon Golub, "They Will Torture You My Friend" - Artaud, from Conspiracy: The Artist as Witness