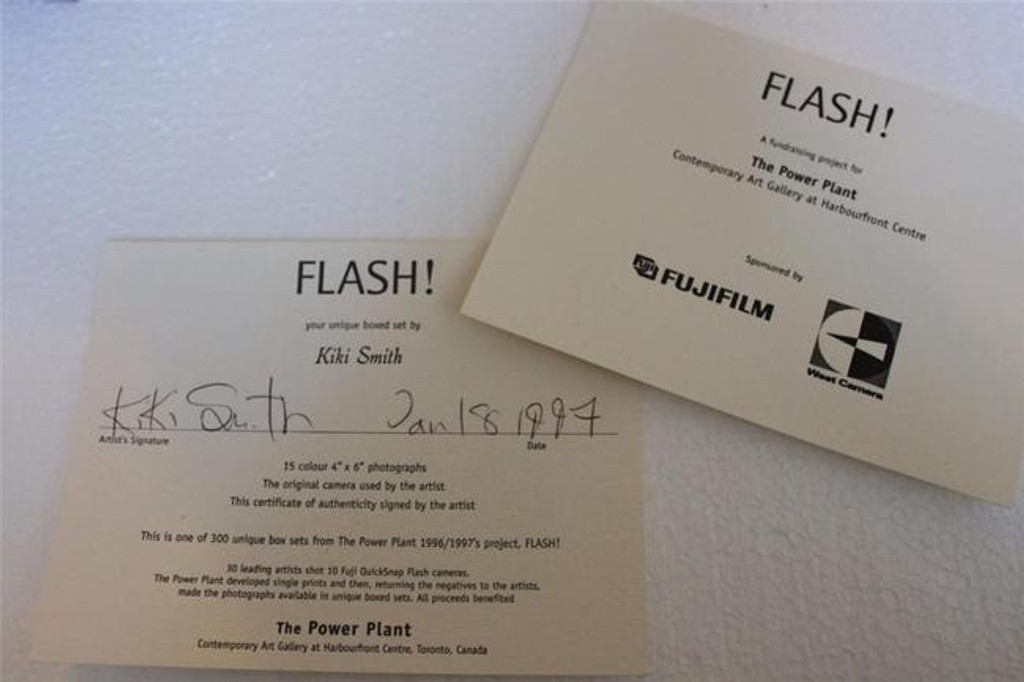 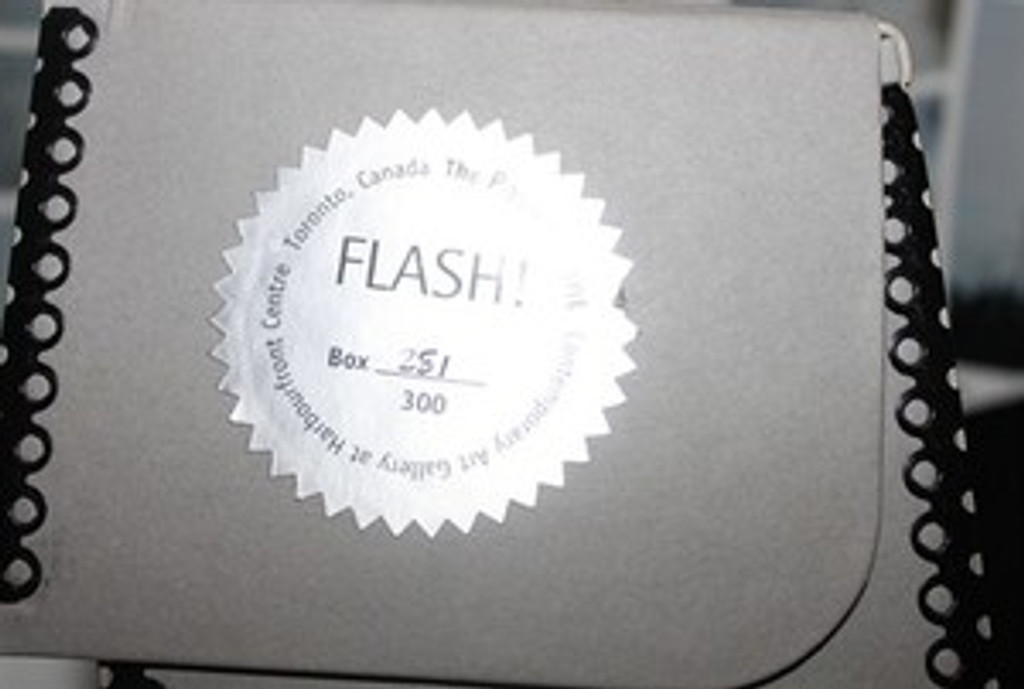 Ektacolor Print, disposable camera -CAMERA SIGNED in permanent grease marker by KIKI SMITH
with 15 UNIQUE photographs taken by Kiki Smith, each measuring 4 x  6 inches
The box is numbered from the edition of 300 (verso)
The Certificate of Authenticity is hand signed in ink by Kiki Smith and dated January 18, 1997
The original camera used by the artist to take the 15 photographs is hand signed in permanent sharpie by Kiki Smith
Edition UNIQUE
set box numbered 281/300 (with each being unique)
Publisher The Power Plant, Toronto Canada
Box measures 6.50 x 4.50 x 4 in

This is a unique offering of a boxed set featuring 15 separate photographs, each measuring 4 by 6 inches, taken by the artist Kiki Smith as part of a special fundraising project for The Power Plant, a Contemporary Art Gallery at Harbourfront Centre, Toronto, Canada. The unique boxed set features a Certificate of Authenticity hand signed by Kiki Smith, accompanied by the 15 color 4" by 6" photographs she was commissioned to take for the event, along with the original camera she used, which is also boldly signed in a colored, permanent marker by Kiki Smith, and wrapped in the original plastic encasing furnished by the gallery.

This is one of 300 unique numbered boxed sets from the Power Plant's 1996/1997 project, "FLASH!", in which 30 leading artists shot 10 Fuji QuickSnap Flash Cameras. The Power Plant developed single prints and then, returning the negatives to the artists, made the photographs available in unique boxed sets. All proceeds benefited the Power Plant Contemporary Arts Centre.

Each photograph is a unique one-off offering created by Kiki Smith for the Flash project. For collectors of photography, and for fans of Ms. Smith's artwork in particular, this remarkable package offers a special insight into this important artist's vision, and in particular, her interest in the natural world.

Considered one of the most influential artists of her generation, Smith incorporates enigmatic and radical reinterpretations of conventional representations of the human form in her work. Represented by PaceWildenstein Gallery, Smith has had numerous exhibitions throughout the world, including solo shows at the Museum of Modern Art and the Whitney Museum of American Art, both in New York; the Walker Art Center in Minneapolis, Minnesota; the Museum of Contemporary Art in Los Angeles; and the Centre dArt Contemporain in Geneva, Switzerland, among many others. Her work is in public and private collections worldwide. Daughter of artist Tony Smith and actress and opera singer Jane Lawrence, Kiki Smith was born in Nuremberg, Germany in 1954. Classified as a Feminist artist, Smith uses a multitude of mediums to provocatively explore the political and social issues dealing with gender and race. Often undermining the traditional erotic nature of artistic representations of women.The Modern Museum of Art in New York has collected her work consistently and owns over fifty of her print projects. In 2005, the San Francisco Museum of Modern Art held a retrospective of Smiths work entitled Kiki Smith, A Gathering 1980-2005, which traveled to the Whitney Museum of American Art in New York in 2006 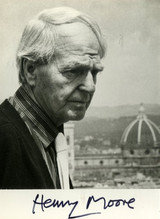 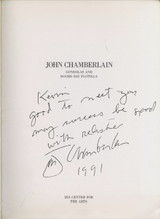