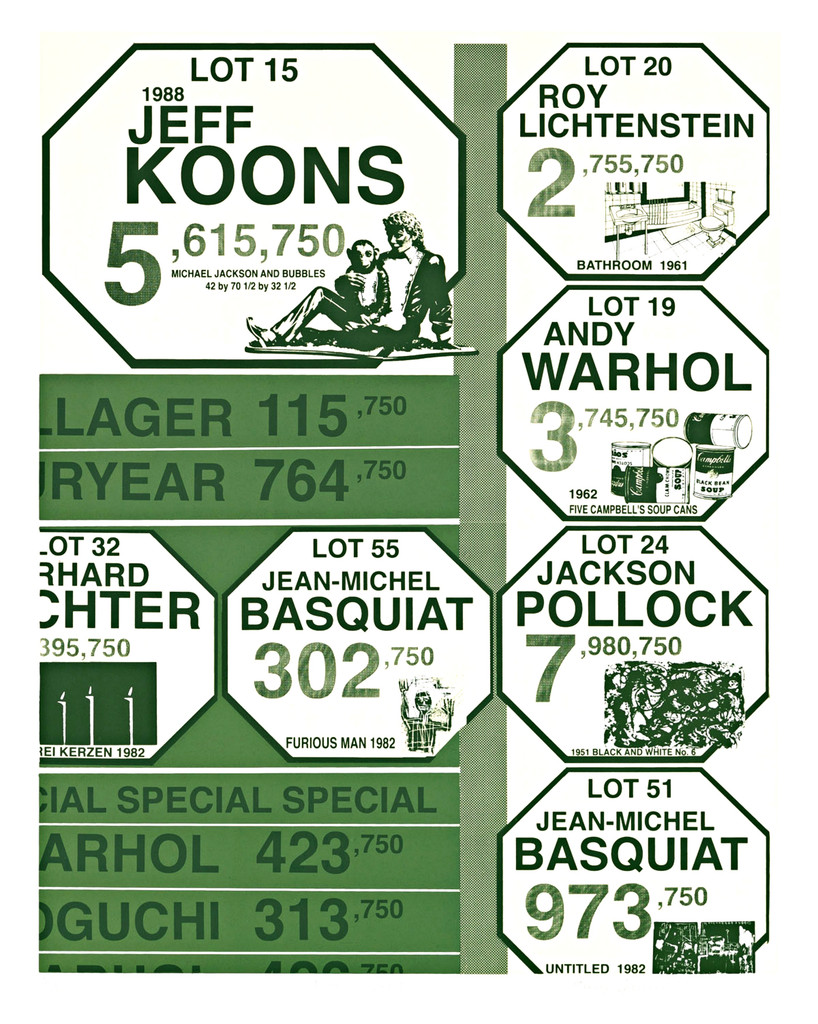 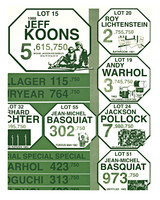 Rarely seen on the market, this is a highly collectible earlier Kerry James Marshall graphic work originally sold by the College Art Association. This important silkscreen on Arches 88 paper is pencil signed, dated and numbered from the edition of only 60. Accompanied by the original documentation sheet from the Brodsky Center at Rutgers and bears the blind stamp on the recto. It was done in collaboration with master printer Randy Hemminghaus. Created in 2003, this earlier work represents themes relating to the commodification of art that would preoccupy the artist and that he would reprise over the next 15 years, culminating in his internationally acclaimed 2018 "History of Painting (May 16, 2007). The present work, "May 15, 2001 resembles a grocery store’s advertising circular. Instead of depicting vegetables or canned goods, Kerry James Marshall “advertises” works by modern and contemporary artists, along with their auction prices, from a sale at Sotheby’s held on May 15, 2001. Like all of Marshall’s work, this image percolates with embedded references to the African American experience and the traditions of art history: the names of Caucasian artists and artists of color are intermingled and some are occluded; salient at upper left is a blurry, iconic little reproduction of Jeff Koons’s garish gilt ceramic portrait of Michael Jackson and his pet monkey, Michael Jackson and Bubbles (1988), from that artist’s Banality series. The figure, racially ambiguous and ambiguously parodic, sets off a sequence of reverberations that ripple through the image: Koons to Lichtenstein to Warhol to Pollock; Jackson to Basquiat to Puryear to Gallagher. Black and white artists intermingle, their values declared in fat, deadpan numbers and their boldface names claiming the visual space once granted to images. In this context, Basquiat’s tiny black silhouette Furious Man (1982) appears in skeptical dialogue with Koons’s more placid sculpture. In keeping with one of Marshall’s long standing preoccupations, May 15, 2001 makes layered references to art history. The artist slyly acknowledges the critical interventions of Hans Haacke and the Guerrilla Girls, who have harshly interrogated the financial underpinnings of the art world, and provides a tongue-in-cheek commentary on Warhol’s Campbell’s Soup cans, now temporarily restored to their original nonart place on the shelves of the American supermarket. In 2007, Marshall reprised this theme yet again: "..a group of paintings takes as its subject the way in which artworks are exchanged, emphasizing their ultimate fate as commodity. Appropriating the format of the supermarket circular, Marshall replaces the everyday goods that would ordinarily be promoted on such fliers with auction results, each from a different auction house and day in early 2007, when the market had reached an apex. One painting depicts results from Swann Auction Galleries, notably one of the only houses to offer a sale of African American artists, while others make evident the relative absence of women from such contexts. Embedded within is a series of purely aesthetic formal choices that are in direct contrast with their content—for example, the invocation of color theory or a riff on neo-plastic composition that unconsciously affects the lens through which these works are seen. Titled History of Painting, they call attention to how value is created and assigned and how it influences the writing of history." - courtesy David Zwirner press release for "History of Painting", October, 2018. (In December of 2018, Marshall revisited this imagery of auction prices in his exhibition Kerry James Marshall: History of Painting at David Zwirner, London)

Marshall was born in 1955 in Birmingham, Alabama, and raised in Los Angeles, California. He received his BFA from the Otis Art Institute in Los Angeles in 1978 and an honorary doctorate there in 1999. From 1993 to 2006, he taught in the School of Art and Design at the University of Illinois, Chicago. In 1997 Marshall was awarded the prestigious John D. and Catherine T. MacArthur Foundation Fellowship Randy Hemminghaus, master printer at the Rutgers Center for Innovative Print and Paper (renamed the Brodsky Center for Innovative Editions in 2006), collaborated with Marshall to produce the lithograph..." Excellent condition; ships flat.

Biography courtesy of Jack Shainman Gallery:
" Kerry James Marshall uses painting, sculptural installations, collage, video, and photography to comment on the history of black identity both in the United States and in Western art. He is well known for paintings that focus on black subjects historically excluded from the artistic canon, and has explored issues of race and history through imagery ranging from abstraction to comics. Marshall said in a 2012 interview with Art + Auction that “it is possible to transcend what is perceived to be the limitations of a race-conscious kind of work. It is a limitation only if you accept someone else’s foreclosure from the outside. If you plumb the depths yourself, you can exercise a good deal of creative flexibility. You are limited only by your ability to imagine possibilities.” 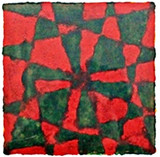 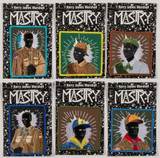 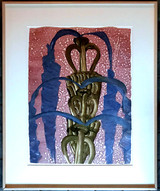